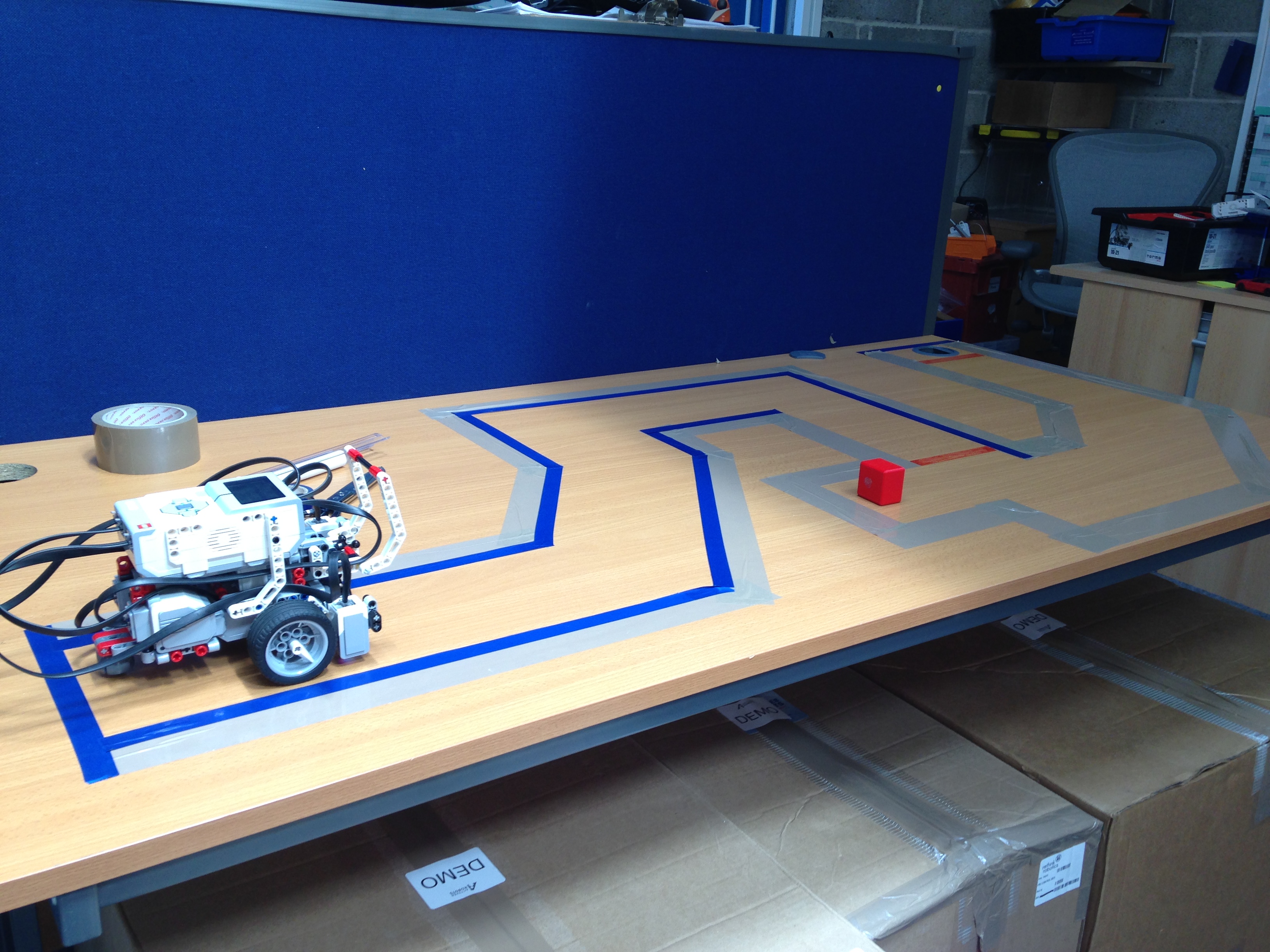 Toby Ford, a Year 10 student from the Blue School in Wells spent a week with us for his work experience and kept a log of all the activities he got up to!

On Monday, I met members of the Active Robots team, including Ollie, who works in sales, and Leah, who is the digital media manager. Then, I assembled a LEGO Mindstorms EV3 robot with a gyro sensor, Push/pull arm attached to a motor, 2 wheels attached to motors, 2 colour sensors and a distance sensor. I then programmed this robot to find its way through a maze made of different colours of tape, and bring a wooden block with it to drop into a hole in the end. The robot would use both sensors to register colour changes and correct its course. For example, if the sensor in port 1 (sensor 1) saw blue or black, it would move forward 0.1 wheel rotations and check again. However, when it did not see blue or black, it would turn left until it did. This was a problem, as later it needed to make a 90-degree turn right and as I had only just started working with EV3 I had limited knowledge and did not manage to get it far through the maze.

On Tuesday, I finished programming the EV3 robot through the maze (after changing the maze a little). I programmed both sensors to react differently to each colour. For example, red on one sensor would make the robot move its arm upwards, and green on another would make the robot move towards the block, lower its arm around it, and reverse back to following the maze. This would mean (depending on where the EV3 was placed to start) it would reach the end with the block and drop it in the hole. There was only 1 perfect run, where the robot did the entire maze AND brought the block with it, but I didn’t manage to record it

When I was done with this, I was part of a simple training talk about the Sawyer robot.  Sawyer is a robot that can be safely used around people, as it is not (literally or figuratively) caged. This means if something goes wrong on a production line where Sawyer is often used, the people can sort it out so the robots can keep working, and the line will not have to be stopped so often/for as long. After the talk, I programmed Sawyer using the inbuilt demonstration feature, meaning if I wanted to pick up a block, I would move Sawyer and press a button that would make It logically predict what I want it to do (which in most cases is pick or place). I could then make it place this block somewhere else, and pick and place another. This feature eliminates the need for a computer for programming simple tasks, as Sawyer would make the code itself. However, for more complex tasks, an internet software called Interra would be needed, where blocks could be simply dragged from the side into a sequence. This was much simpler than my previous experiences with programming, as I had only used Python before.

On Wednesday, I tested another of the LEGO education kits, the WeDo 2.0. This is a much simpler robot aimed at primary school children and used only one motor. However, there were many robots that could be made from the kit, including a helicopter (motor attached to a winch), a moon rover and several different land vehicles. The WeDo 2.0 app had lesson plans and instruction on most robots, and programming on the app was even simpler than the EV3 (in both cases, all that needed to be done was drag blocks and change details, much like Sawyer). As i was doing this, the teacher visit from school happened.

After this, I moved onto looking at the AR10 Robotic Hand. The hand had 10 different servos, with an upper and lower for each finger and thumb, and used either Python to program, or the method more used, sequences. Each servo was registered to a slider on a computer, and moving the slider to a certain position would mean it either opened or closed these servos. You would then save a frame, so the position of each finger and thumb is recorded. For example, you could set the hand to make a fist, and make it raise each finger individually by setting a frame as each finger would unfold.

I then took this another step further, as I attached the hand to Sawyer instead of the pick/place tool. I moved the fingers and thumb so only its index finger was extended, and programmed Sawyer to type “hello” on a keyboard. However, the finger would drag over unwanted buttons and hold for too long, so instead of “hello”, it came out as a long string of random letters. I re-attached the pick/place tool and instead made a stack of wooden blocks.

On Thursday, I created my own EV3 lesson plan. Using the existing plans as inspiration, I took apart the EV3 robot I had built earlier in the week and started from scratch making my own plan as a power point presentation with written instructions and photos. Some of the lesson plans can be a bit difficult to follow with the images, so I included step by step text instructions alongside pictures of each stage of the build.

If possible, I would like to send the lesson to my Computer Science teacher, I think it would be fun to see them teach my class how to build and program the EV3 products using my lesson plan and to introduce them to the Lego Education products.

On Friday, for my last day, I returned to using the Sawyer robot. I spent a few hours getting deeper into the programming side and learned about how to make more complex instructions and patterns for the robot to follow. I also had the opportunity to use different tools, such as a suction tool to move and place blocks. The suction tools are easier to use than the grippers, but you have to be much more accurate with where the blocks are and more precise with your instructions.

I feel like I’ve really learned a lot during my week here and would like to go into robotics. The team at Active Robots gave me some ideas of how best to continue my education to achieve this.

Many thanks to Toby for spending the week with us. To find out more about how we can help as an educational resource, get in touch!