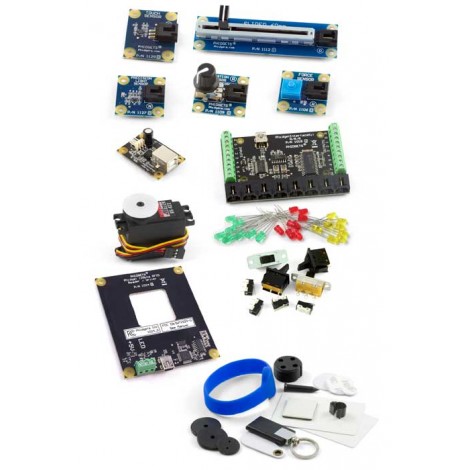 Robot Phidgets is the term used to describe a selection of modular electronic components, including actuators, interfaces and sensors, which can be connected to a personal computer via Universal Serial Bus (USB) connectors.

Robot Phidgets are ‘plug and play’ that is, they work as soon as they are connected to a computer system and require no soldering or microcontroller programming. In fact, programming can be achieved via an application programming interface (API), which is supported by a vast range of programming languages and environments.

Collectively, these factors mean that Phidgets can be connected together to create a working robot quickly and easily. For this reason, they are hugely popular for prototyping in academia and industry. Robotic hobbyists can choose from an extensive range of Phidgets, including input/output (I/O) boards, motors, sensors and relays suitable for almost any purpose, all of which are fully cross-compatible.

Autonomous and remote-controlled robots are naturally popular robot Phidgets projects among hobbyists, but monitoring and control systems of all descriptions are equally possible, along with other applications too numerous to mention. One popular option is the single board computer (SBC), which is essentially the ‘brain’ of a Phidgets robot but also includes multiple high-speed USB ports for connecting Phidgets, as well as options for audio input and output and serial devices.