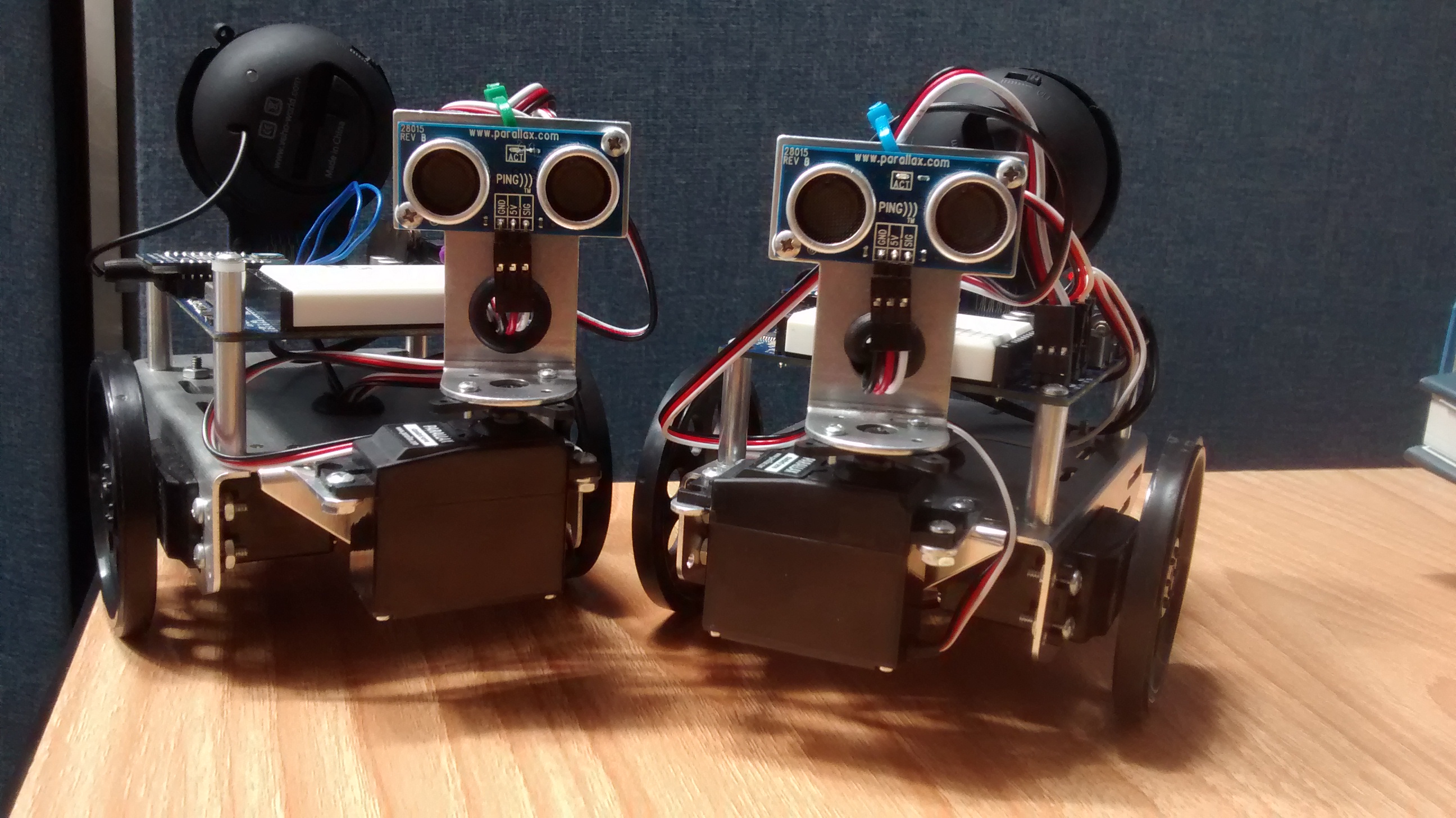 My second task during work experience was to get two cute Wall·E like bots up and running. The plan was to have them whizzing around whilst blaring out music. These bots seemed relatively cute and simple compared to the behemoth of the hexapod, so I began trying to fix them.

The first thing I needed to do was find out what bots they actually were. Parallax, the company that makes them, also makes lots of other similar looking bots. I first thought by the look of their board that they were Boe Bots with added attachments; I began downloading the software needed to program them, only to find it did nothing at all. I then began studying Activity Bots to see if they were correct. They were both blue so of course they were the same robot, right? After yet again downloading and working on yet more software I found out the board was not an Activity Board, but a Board of Education. So I had finally narrowed it down to an Activity Bot with a board of education. Feeling pleased I’d narrowed it down I began reading a 300 page tutorial on them. However Horatio came over and informed me that, you guessed it, they were not Activity Bots after all. They were Juke Bots; mystery solved.

With that step done I installed the 4th software of the day and began trying to find out how to program them. I managed to find a perfect tutorial on their website with links to the exact programs I needed. Feeling pleased I’d got that far, I realised I had no clue how to get the programs into the bots. I looked through every tutorial, post, question and link I could find, all of them simply saying “Program the bot” or “Download the program to the bot”. I began surveying all the different tabs and commands on Propeller (The software) looking for anything that looked like it could upload programs.

After finding how to upload the programs, I uploaded the two the tutorial said. The moment of truth, I typed in “1”, hoping it would play the first song in a loud of blast of triumph. It gave out a static buzz of defiance. This was where things got complicated. I began looking at the lines of jargon and technical code, trying to see if anything was out of place, but mostly trying to see if I understood any of it. I searched and looked for what each line of code meant, tweaking some old code and adding a few additions so it would work for the music I added to the SD card.

Upon checking and surveying the code for what could have gone wrong, it seemed to work fine. That was when we noticed on the very first page of the tutorial we needed a transmitter. What I'd been doing all along was uploading the transmitter AND receiver to the bots. I hooked up a separate board and uploaded the right programs to the right placed. I placed the robot on the ground and set it off. It began wheeling around using sonar to detect where objects where, and avoided them. I tested the music and it began playing some preinstalled Lady Gaga. Another robot fixed! Or so I thought. It began going around in circles, the sensor was locked in place, not panning as it had been. With no sonar to say the path was clear it was stuck in a loop, going around and around on the spot.

We began looking to see what could have gone wrong, and the simplest answer was the right one. There was a dodgy wire connecting the sensor to the board. We fixed this, neatened up the cables and tried both the bots. They worked perfectly, navigating around the room and playing their music. Another two bots repaired and driving around!