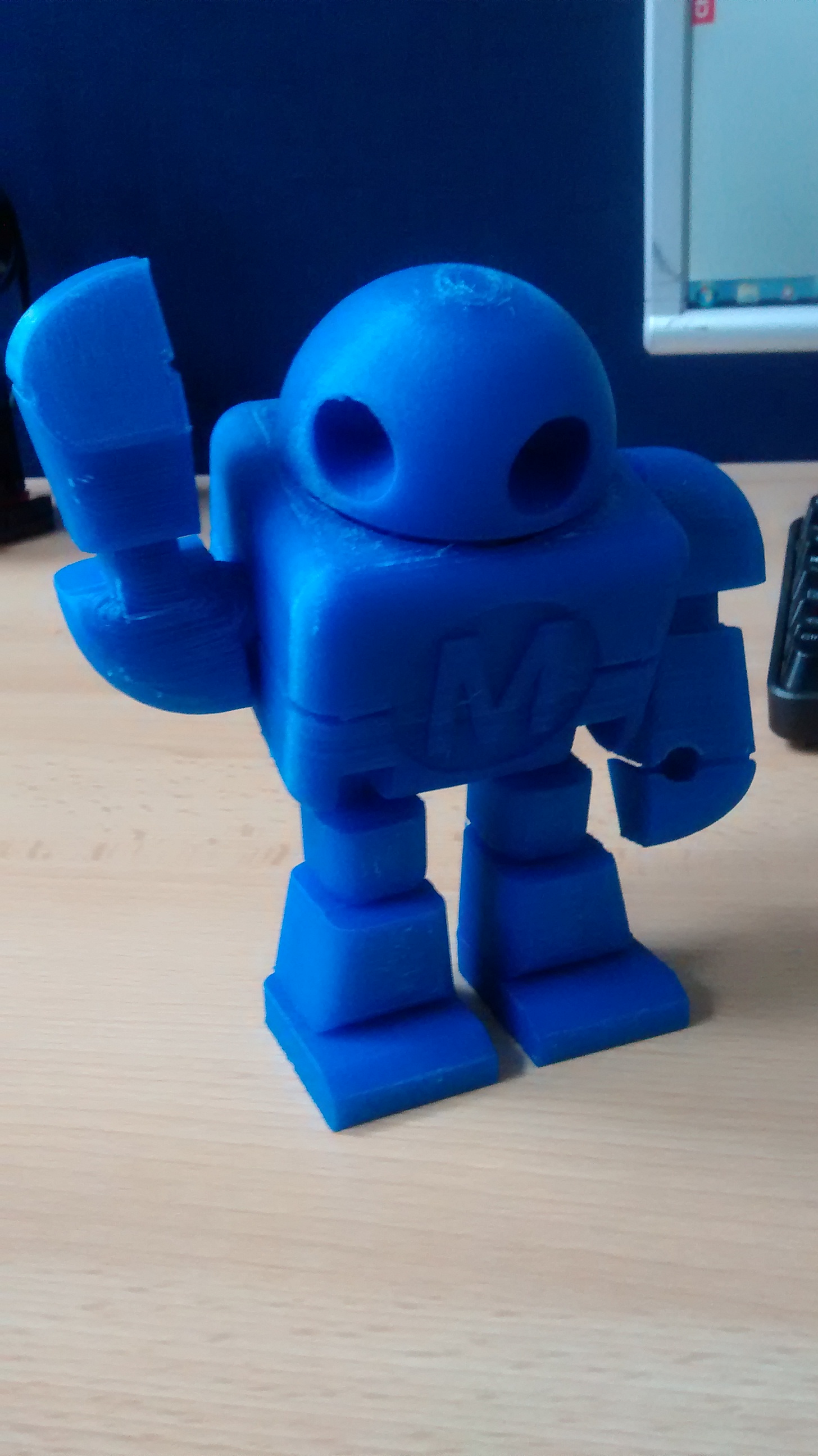 Before this week I had two impressions of 3D printers. You have the huge, expensive machines that take days to print and cost more than I'd earn in a year. Then you have the other printers that, whilst affordable, print fuzzy and poor quality items. When I was tasked with using a cheap 3D printer I assumed it would be the latter, and I'd be lucky to make out feet from faces. It would turn out that this assumption couldn't have been further from the truth.

First, I had to set up and calibrate the printer. I was given a manual with what to do and set it up with ease. I installed the drivers onto the PC and downloaded DoraWare, the program used to ready the models for printing. It all went smoothly until I realised I'd accidently installed the Chinese version, 哦不! I installed the English version and began looking for something to test. I began on Thingiverse, a website filled with 3D models readied for printing. Being at a robotics company I instinctively searched for a cool robot to print. I found it instantly. Not only was this robot small and cute, but it also moved!

I downloaded its file and began generating its Gcode. This is what's sent to the printer to allow it to know where the print and when. I put that onto an SD card and inserted it into the printer. I told it to start printing and the nozzle began heating up to a huge 220C! The blue plastic started to come out onto the printer, missing the printing bed. Thinking something had gone wrong and it wasn't aligned I quickly stopped the print. It turned out that it's supposed to do this, and it effectively cleans and clears the passage. With that sorted I started it up again and began observing. It started by making a "base". The printer created thick columns of plastic vertically, and then placed thin rows on top of them. On top of these thin rows, the newly created base, it began printing the robot! It did it a layer at a time, carefully building slice onto slice. There are lots of options you can change about each model you print. The 2 main ones are infill and layer height. Infill is the percentage of solid parts you want filled. For example, if you print a solid cube it'll be heavier and use more material. Setting the infill to 20% means the outside looks identical, but inside is a honeycomb type structure that keeps it secure, whilst using less plastic and being lighter. I'd set the infill to the default 20%, and watched as it created the zig-zag structure inside its body and legs.

It had been printing for about an hour before I had to leave, but when I came back the next morning I was in for a treat. There was a robot sitting there in the 3D printer! I took the base off of the printing bed and carefully removed the robot from it. I began loosening its joints. It was remarkable for so many reasons. First, it had printed working joints, let alone on such a small scale! Second, it was extremely high quality, something I'd expect from a printer triple its price. And last it was so strange seeing something being formed this way. What was a flat printing bed had an object on it that looked like it had been fabricated out of thin air.

The next thing I did was try to fix a keyboard. One of the feet was missing. I went on Thingiverse and found a replacement one. Within half an hour it had printed! We fitted it into the keyboard and it worked fine. I began making more useful things, including 2 different types of cardholders.

I set about making an army of the original robots, spreading them throughout the office upon desks and monitors. I began swapping and using different colours, before having 10 or so blue and purple minions at my disposal. With these all made, I set about finding some different models to test out the possibilities of the printer. One of the first (And most fun) designs I found was a desk catapult, a tiny contraption that could fit in the palm of your hand, yet could fire objects across the room!

I was then tasked with creating a range of objects that showed off what the printer could do, and how much they cost. I set about creating some cheaper items that still had functionality. Two of these were a rattle and a whistle, both having tiny spheres inside that allowed the whistle to work and the rattle to shake. I then tested a robot that used pins to allow me to pose them. It was made up of small, cheap pins and joints which then snapped into place, creating a cute little desk buddy. I printed off more and more designs I found, ranging from a shark puppet to a buildable treasure chest.

Having never even seen a 3D printer before, the last few weeks of being able to use one was surreal, seeing a giant robot being crafted from a flat base is still something that never ceases to amaze me. The wide range of possibilities and the extraordinary designs that were capable of being 3D printed are incredible. I’d seen designs for so many impressive models: Fun ideas like modular spaceships, helpful items like wrist braces and brail dices and incredible models of realistic Mars bases!