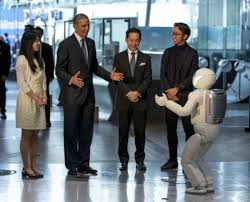 Honda's Asimo robot demonstrated its running and football skills, fielding a powerful kick and then celebrating by hopping on one leg.

As part of his four-nation Asia tour, President Obama has visited students at the National Museum of Emerging Science and Innovation in Tokyo where he was welcomed by a humanoid robot.

The president appeared bemused and later told the students he had found it slightly unnerving.