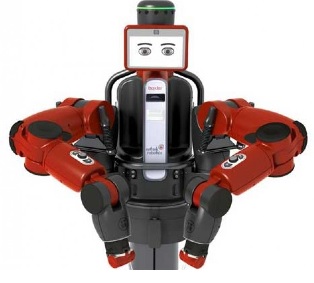 In the latest series of The Gadget Man, presenter Richard Ayoade continues his search for anything that helps him to avoid even minimal exertion. In the episode aired on Channel 4 on October 6th, he discovers the benefits of having his own robotic butler. Find out more about Active Robots Appearance on the Gadgetman Show.

Rethink Robotics’ Baxter Research Robot supplied by Active Robots is a humanoid robot more often seen in the laboratory, but that does not stop Richard, or fellow ‘bon viveur’ Ade Edmonson, from taking advantages of its capabilities.

Certainly, its state-of-the-art sensory systems come in handy for serving food and pouring wine to the lackadaisical pair in their stylish ‘Restaurant of the Future’. Think Marvin (the Paranoid Android from The Hitchhiker’s Guide to the Galaxy) meets Kryten (from Red Dwarf), and you are in the right ballpark.

Of course, employing a ‘Baxter’ in a central role means he can demonstrate a range of abilities that will allow him, and successive generations of robots, to play a leading role in the future of food, dining and many other aspects of human life.

Waiting hand and foot on two indolent comedians may appear a trivial activity for an award-winning robot that retails for an average £19,000 but, joking aside, Baxter serves notice that the age of the robots is close at hand.

There are already restaurants in the Far East, with the exception of a technician or two, are staffed entirely by robots, and the replacement of human workers, especially entry-level workers, by robots can only accelerate in the future.